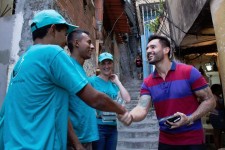 The 2016 Olympics saw the launch of an unprecedented drug prevention campaign determined to spread the truth about drugs throughout Brazil. The Foundation for a Drug-Free World built a corps of local volunteers passionate about ending the country's crack epidemic.

Rio de Janeiro, Brazil, September 13, 2016 (Newswire.com) - ​​​Thousands of volunteers from hundreds of churches and scores of nongovernmental organizations joined the Los Angeles-based Foundation for a Drug-Free World in an interfaith effort to launch a massive drug prevention campaign during the recently concluded Rio Olympics, handing out a million copies of the Truth About Drugs booklets in the streets of São Paolo and Rio de Janeiro.

Their passion is fueled by the need to end the country’s crack cocaine epidemic that is blamed for a staggering 166 percent increase in homicides in Brazil between 2002 and 2012. A 2012 survey by the University of São Paulo estimates 400,000 Brazilians are regular users of this drug, making Brazil the largest consumer of the drug internationally.

"This is just the beginning. We will carry on this campaign until we end the devastation drugs have created in Brazil."

Ambra Calzolari, Executive Director of the Foundation for a Drug-Free World

Volunteers include members of the Baptist, Methodist, Seventh Day Adventists, Scientology and Catholic churches, local youth groups and the Rio Civil Defense. Taxi drivers loaded their cars with copies to give to their clients, while hundreds of local shops set up displays for their customers.

The directors of the Drug-Free World chapters of Venezuela and Colombia and the Latin American coordinator from Mexico City flew to Brazil to help organize and carry out the campaign where they joined the Executive Director of the Los Angeles-based Foundation for a Drug-Free World.

“The most unforgettable experience for me was my first trip to Favela San Joao,” says Mario Chirinos, Executive Director of the Venezuela Foundation for a Drug-Free World.

The favelas are vibrant urban communities that have sprung up around Rio. However, many of them are inundated with violent gangs and drugs, and are often referred to as Cracklands.

A 13-year-old boy who had just come out of the juvenile prison started crying while reading the booklet. Chirinos hugged the boy and asked a Brazilian volunteer to translate for him to find out what was going on. “These are tears of hope,” said the boy who continued reading and crying. He thanked them for showing him and his friends a future that wasn’t filled with despair and hopelessness.

In the Foundation’s signature aqua T-shirts and caps, volunteers handed out copies of the booklets at Copacabana Beach and the city center at Praça Maua. And the City of Rio backed the Foundation, giving them access to the Live Sites in Praça XV, Boulevard Olimpico, and Parco Madureira and arranging for their public service announcements to play on the Live Site screens, reaching some 1.5 million people.

America’s gold medal Women’s Eight Rowing Team joined in the action, handing out copies of the booklets and signing the Drug-Free pledge.

“This is just the beginning,” says Ambra Calzolari, Executive Director of the Foundation. “We will carry on this campaign until we end the devastation drugs have created in Brazil.”

Working with civic and nongovernmental organizations and an international network of volunteers and partnerships, the Foundation has distributed more than 7 million copies of The Truth About Drugs over the past year, some 80 million copies since the booklets were first published in 2006.

Read the article on Drugfreeworld.org