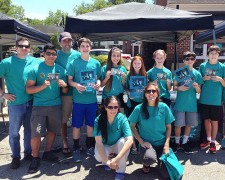 After spending 21 years busting dealers, Frank Bianco, with the help of his wife Anne, is determined to educate the community and save lives. With the help of the drug education materials of the Foundation for a Drug-Free World, they are doing just that.

RALEIGH, N.C., October 14, 2017 (Newswire.com) - "What did you think? Did you like it?" a Scout leader asked a troop member after a Truth About Drugs presentation.

Anne Bianco, standing nearby, was horrified. She and her husband had just delivered the seminar at St. Andrew's Church.

Anne sighed. Then the Scout leader approached her and shook her hand. "Please come back next year," he said. "That's what I want for every one of my Scouts."

In their first presentation to a healthy-sized troop —45 in all — the Biancos had made an impact. Browsing through after-event surveys from the boys, they saw that one-for-one, the Scouts said they would never touch drugs. What's more, over 85 percent now wanted to help others learn the truth.

If you rewound a few years, you would find Frank Bianco, then a New York narcotics detective, doing "B & Bs" (buy-and-busts): He would go undercover to "buy" drugs from a dealer, then make an arrest.

Frank speaks from experience (21 years on the force) when he says, "Drugs are the main cause of the majority of all criminal activity out there. Anything bad that occurs, alcohol or drugs are part of that."

Although Anne's life was quite different from Frank's—she worked in a dental office—a shocking number of office patients would request oxycodone prescriptions to feed their addictions. That was in Richmond County, New York, a city with one of the top 10 overdose death rates in the state.

So when the pair moved to North Carolina after retirement, they resolved to use what they knew to help others avoid the trap of drug abuse and addiction. Online, they came upon the educational curriculum of the Foundation for a Drug-Free World, including Truth About Drugs booklets and videos, and it was "love at first sight" says Frank, whose favorite thing about the program is its honest approach.

The couple began by contacting their church, St. Michael's, the largest in the diocese of Raleigh. There, they delivered Truth About Drugs training to 400 youth as part of their confirmation classes.

Church staff were so impressed that the director of faith formation wrote a letter to the Foundation for a Drug-Free World stating, "The printed materials were outstanding and the documentary video and public service announcements held our youth a captive audience."

Frank echoes the sentiment. "They're getting the information. When that PSA runs, we have their full attention," he says.

Since February of 2015 when they began, Frank and Anne have expanded their activities to delivering seminars to other church groups, Boy Scout troops and the YMCA. They concurrently participate in outdoor events with their team, now grown to a group of 22 friends, neighbors, family members and kids. They man drug information booths wearing Drug-Free World T-shirts and distribute The Truth About Drugs materials. Meanwhile, Anne and Frank work on "booking their next gigs," as he puts it, which means offering to deliver free training to organizations that express interest in the program and want to become involved.

"We consider ourselves Drug-Free World ambassadors," says Frank. "We speak to anyone who's willing to listen, and we keep putting the word out to establish a strong awareness that will save lives."